Curtis Davis joins us to talk about the pulse of occultism across the divide of race.   Jason and Andrieh welcome Curtis to talk about the different cultural mindset, values, and ethics in the African American community from the scene in New York.  Curtis should know, he has interviewed many priests and priestesses of multiple faiths.  Curtis covers the similarities, the differences and how we can cross that artificial divide to all become stronger and more effective magicians by listening and learning from each other.

Curtis Davis is the founder of TON (The Occult Network) and the founder/host of Occult Science Radio.He has interviewed many of the biggest names in the esoteric genre such as John Anthony West, Robert Bauval, Dr Carmen Boulter, Lon Milo DuQuette and many others. Curtis began his study of the occult sciences at the tender age of 18, born and raised in Brooklyn, N.Y. after having experienced Christianity and Islam. His search for something more first lead him to study Silva Mind Control and the works of Dr.Nathaniel Branden. “After learning the truth about self examination, I could no longer turn back to the world of organized distorted doctrine”.

His studies then took him further into the works of Dr Connie Zweig and Aleister Crowley, as well as the Kemetic Sciences. He then decided to share this knowledge with the world via Occult Science Radio,which he launched in April, 2008. In the age of digital content Curtis then wanted to take his knowledge of the occult sciences to the next level and founded The Occult Network, Inc. “I will never forget the significance of TON’s mission due to the fact that the company was officially incorporated on June 25,2009, the same day as Michael Jackson’s death”. 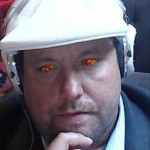